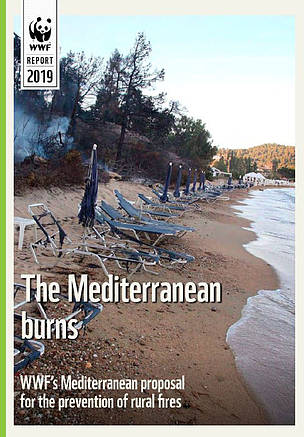 The Mediterranean Burns (Report rural fires)
© .
Most countries in the Mediterranean basin are facing the same emergency regarding rural fires. Their forest lands
are burning out year after year through small fires, but ever more frequent the conditions are perfect for fire crises
difficult to keep under control, resulting in major environmental and economic damages and severe risks for human life.

The most recent ‘megafires’ have shown how the landscape, forests, current firefighting systems and society as a whole, are not prepared for these fires exacerbated by climate change and socio-economic changes, as land use changes, urbanization or increase of forest flammability.

In this report, WWF analyzes what is happening in the north Mediterranean region that causes it to burn in increasingly dangerous waves and potential solutions. The only effective strategy to face these fires includes facing the causes and designing a real prevention system: reducing the high incident rate and making the territory less flammable and more resilient to climate change. Urgent action is needed to prepare for the following episode that will take place sooner or later.

Most of north Mediterranean countries share the same challenge: tackling the virulence of rural fires, increasingly frequent, exacerbated by climate change. That is why, for the first time, this report on rural fires, coordinated by WWF Spain in cooperation with the national offices of WWF in France, Greece, Italy, Portugal and Turkey, analyses the situation of each country at the north Mediterranean, offering cross-border proposals, shared and adjusted to solve this terrible joint environmental and economic problem.